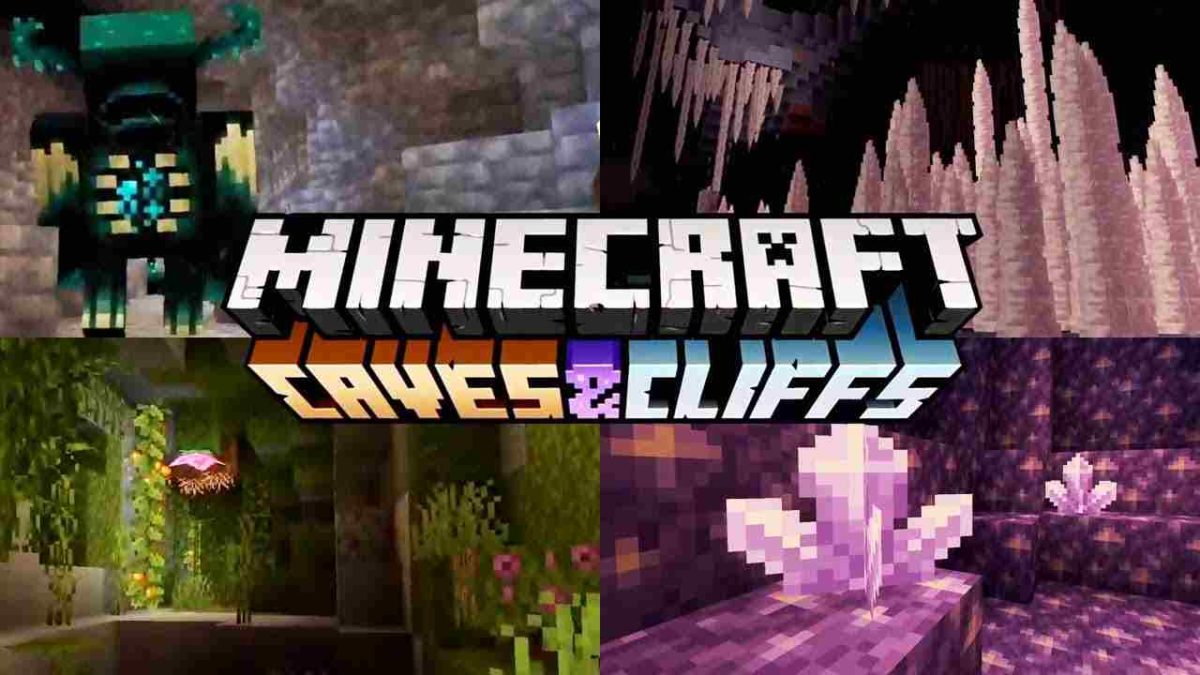 The Minecraft Caves & Cliffs Update will be released in two different parts. One this summer, the other on the holiday season (end of 2021). Find out what to expect below!

According to Mojang (Microsoft), there are three main reasons for this release to be split in two. The first one is quality, the second one is technical complexity, and the third one is related to their own staff's well being (fair enough, we want everybody to be happy and healthy 🤗)

To ensure quality, they have decided to release some of the features in the Caves & Cliffs Update on the holiday season instead of the summer of 2021. They're afraid that, if they rushed things, there would be a risk that their quality wouldn't be good, giving us a bad experience.

It's also tricky for performance reasons, because there's just more going on when the world is higher (I guess because they won't use a single byte to address the vertical coordinate, plus the entire matrix becomes massive if they allow for the world to be too tall, unless they really know how they optimize things).

They decided that they don't want to rush it, but instead to make sure they give this the time it deserves.

While at the same time, they realize that there's a bunch of features that don't involve changing the way the world is generated, so they decided to split it, and put those parts in the summer update and then put the world generation parts in the holiday update.

With the Caves & Cliffs Update they realized that, to release all the features in the summer of 2021, they would have to overextend themselves a lot, and they don't want to force anyone to work overtime (better than other publishers that I won't mention here 😂).

They also mention the fact we are living in a pandemic right now, and they know that many people have been affected by that. Therefore, it’s much better to make sure that their staff feels as well as possible, which translates into them being more creative and able to produce a better game (considering they release all those updates for free, and that they put all that effort into bringing nice features to it, it's just awesome to see they care enough to open up about it and interact with the community, instead of just giving us canned responses like other game producers…).

In the first update, for the summer, their focus is on the blocks and mobs. Not too much on world generation. Block-wise, they will include biome blocks such as dripleaf, pointed dripstone, glow berries, and some building blocks such as deepslate, etc.

The new mobs to be included should be the axolotl, the goat and the glow squid. Most of the world generation is in Part 2, but there'll be a little bit in Part 1 as well, such as generation of copper, geodes and other things like that.

The second part is all about world generation. That's where you'll find, for the holiday update, new caves, new mountains and the new world height, as well as the actual placement of the new biomes.

We should be able to update our existing worlds with both summer and holiday updates, without problems (hopefully 😉).

They make it very clear it's a very important aspect of the update, since many people (myself included) have worlds we care for many years, and they don't want us to lose that, they even mention that we should be able to continue playing with our worlds for many years into the future (how awesome is that? can we have The Sims 3 back already?) 🥰.

Regarding testing holiday features in the snapshots and betas, it is still possible, however they have turned them off, but you can turn them back on, so you can continue to test (and enjoy) them! They also ask for us to provide feedback, because they will continue development, so they can release the second part of the update in the holiday season of 2021.

How to Enable The Experimental Features from Minecraft Caves & Cliffs Update

When creating a new world:

When using an existing world:

If you are using a world that was created previously that you're particularly attached to then please note that betas can potentially make worlds incompatible with future versions of Bedrock. While copies of your world are generated automatically in the event of something going wrong, you're also able to create copies of your world manually as an extra precaution.

Keep in mind that the world you create with the data pack will be flagged as experimental by the game, and such worlds are not guaranteed to work in future versions. Also, please note that you can’t add data packs that change the world generation to existing worlds, so you must create a new world to access the experimental features. Of course, you will be able to upgrade existing worlds once the update is released.