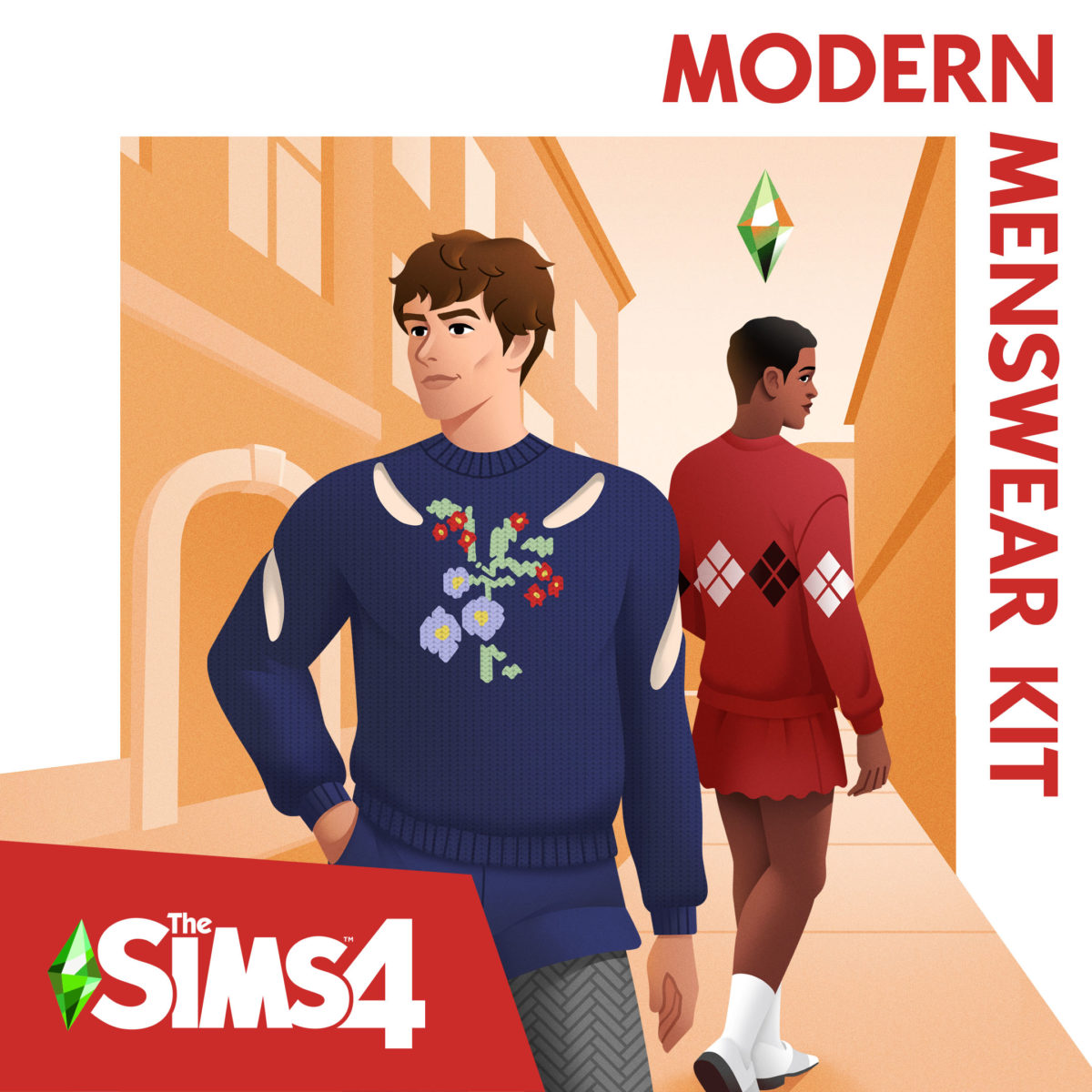 The Sims 4 Modern Menswear Kit Pack, part of the Season of Selves collection, is the latest DLC released for the game and it is, like its title says, focused on male / gender neutral / unisex clothing. Find out what's included with it and share your opinion below...

The Sims™ has always been a creative destination where players come to express themselves, discover new experiences and play with life.

To further empower players to find new and expressive paths to self-discovery, and to deliver on the promise of providing more contemporary menswear options, The Sims worked with the British Fashion Council - a not-for-profit organization supporting British design talent and championing responsible and creative businesses to further strengthen British fashion around the globe - to Simify an up-and-coming menswear brand and help stretch style boundaries with its next fashion kit, The Sims™ 4 Modern Menswear Kit.

“The brand is about redefining masculinity,” continues Cooke. “We always try to be authentic, and without excluding anyone. We’re about redeveloping and refining old ideas, but making them incredibly modern, and pushing that idea to the point that it transcends things like gender.”

For The Sims 4 Modern Menswear Kit, Stefan Cooke worked with The Sims team to bring a wide-range of new-age menswear to players and creators around the globe. Consisting of 23 pieces, all of which are Simified recreations of real-world Stefan Cooke collections, the garments range from the traditional to the revolutionary, masculine to effeminate (this sounds a bit rude IMHO 🏳️‍⚧️😢🏳️‍🌈), and fusions of them all. There’s jackets, trousers, suits, and shoes, as well as some of the designers’ favorite pieces, including the Stefan Cooke Wool Varsity Coat with Skirt, a design that perfectly encapsulates the evolution of modern menswear.

Alongside the dynamic shapes and silhouettes, fabric is another quintessential Stefan Cooke characteristic. The former brings us deeper into the boundless future of menswear, while the latter pays homage to the familiar classics.

“Each material was carefully hand-painted to emulate the texture qualities by doing somewhat of a caricature of the details,” explains Vincent Joly, Senior Art Director for The Sims. “Exaggerating the shapes and controlling the contrast to not look too busy or photorealistic, at the same time not reducing the details too much to lose the essence of the fabrics. Each piece was tuned to find that sweet spot.”

Burt and Cooke are not just looking forward to seeing their styles democratized and digitized, they’re also excited for the self-exploration that their kit will inspire, both within The Sims and in the real world.

“I hope people become more explorative with what they're wearing, especially if they're guys,” says Burt. “I think it's a good thing if people feel more comfortable and unafraid to wear what they want to wear.”

“Fashion can be about identifying as part of something, but also as your own person. It’s both for community and individualism,” adds Cooke. “That's why fashion is so amazing. It can be the slightest thing, and it can really change how you feel about yourself or what you want to put across to the world.”

The Sims™ 4 Modern Menswear Kit will be available beginning December 2, 2021 on PC and Mac via Origin™ and Steam®, PlayStation®5, PlayStation®4, Xbox Series X|S and Xbox One systems.

What do you think? Love or hate it? Now that I could see the entire pack's description I am happy to say there's a few items I like, but not many.

Their Main Game Illustration shows something that looks more like an underwear collection... 🤷🏻‍♂️