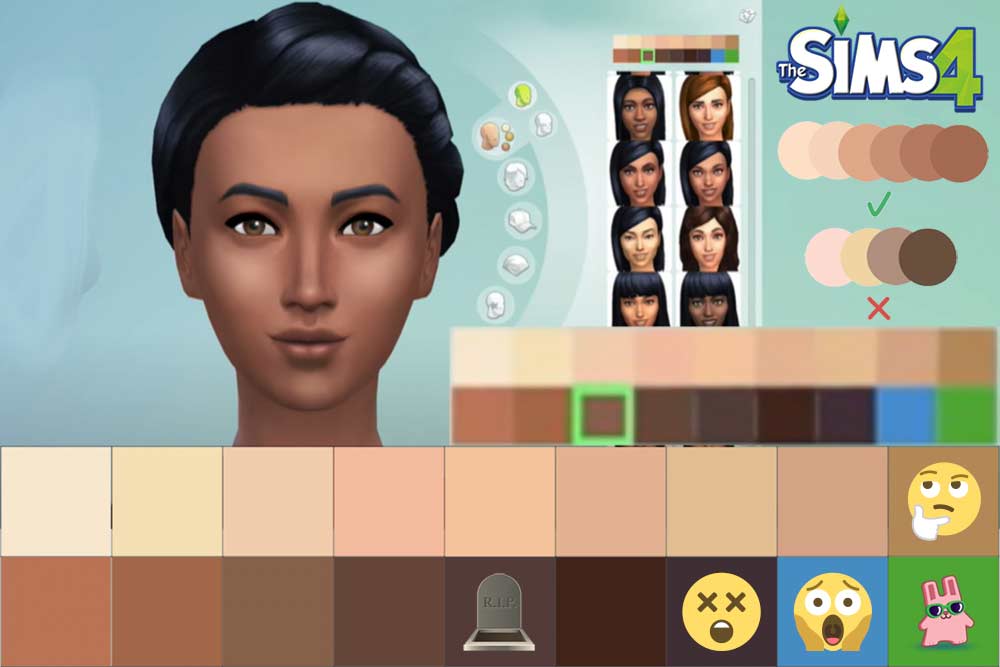 It's finally coming! On October 6th, we are expected to finally receive the first of two skin tone and make up create a sim updates, which should improve the ashiness of darker skin tones, but without adding new ones, plus fixing two afro hair styles, in what seems to be a desperate attempt to remediate EA's current PR nightmare around the issue.

As you can see, the original skin color palette offered by EA for the past 6 years on The Sims 4 isn't that wide or tasty. If you're a blue person, you'll have a skin tone, but don't try to have a normal dark or extra light skin and you're in trouble!

After a massive PR Nightmare for the past few months EA is finally doing something about it, though (at least in theory, we'll see when it happens), and they promised to address the issue in two steps.

First, on October 6th, 2020, the game will just have its current shades updated (be prepared to see things breaking, my beloved custom content lovers), and two afro hairstyles should be fixed to look a tiny bit more realistic (hopefully).

Then, sometime on December (hopefully before Christmas), we should be receiving a "massive" (irony tone) update with 100 shades and a lightness slider for skin tones, and a transparency slider for makeup!

Below you can see the original Patch Notes (can we call them that?) from EA

A NOTE FROM OUR TEAM: HOW WE’RE ADDRESSING SKIN TONE IMPROVEMENTS

The Sims team will be releasing a base game update around existing skin tones on October 6 for Mac/PC and November 10 for console. As we work on expanding skin tone variety, in this first step, we’ll be improving the blotchy artifacts and ashy appearance of darker skin tones on mid and high spec machines*. (Not sure whether this applies to your computer? See the note below!) As mentioned in our initial video, we recognize there is a need to improve the representation of hairstyles in our base game as well, so in October, we will start by updating two of the base game hairstyles.

Bigger changes are coming! In December, we’ll be rolling out at least a hundred new skin tone swatches in cool, neutral, and warm tones with a particular emphasis on darker skin tones. Beyond the new additions, we are introducing a slider on all swatches, both new and existing, that will allow you to modify each selected tone to be lighter or darker. We’ve heard your feedback on makeup as well. To truly complement the expanded library of skin tones launching in December, we’ll also be adding new sliders for makeup in Create-A-Sim mode. The updated customization options will offer an entirely new level of control of your Sim’s appearance so they can look as flawless as possible. Plus, the December update will include another two improved base game hairstyles.

Keep an eye out for more information from our team in late October or early November as we start to implement these changes. We’ll also be sharing more details about how we’re collaborating with external partners, including talented and diverse community members, to make sure we get this right. As always, we thank you for sticking with us as we continue to grow. We’re looking forward to sharing all of this with you in the coming months!

Will you Actually See a Difference?

As you can see from their official release, only people with middle to high range computers will benefit from it, and only if you turn Uncompressed Sim Textures ON (meaning less performance, of course), as they inform below.

Download Most of the Files in Advance by Setting Up The Sims 4 Automatic RIGHT NOW on your computer!

The current version of The Sims 4 Automatic is 1.66.139.1020, including all DLC up to Star Wars, which means you'll only have to download a small fraction of the files when the new update is available in a few days if you already have the current version synchronized on your computer!