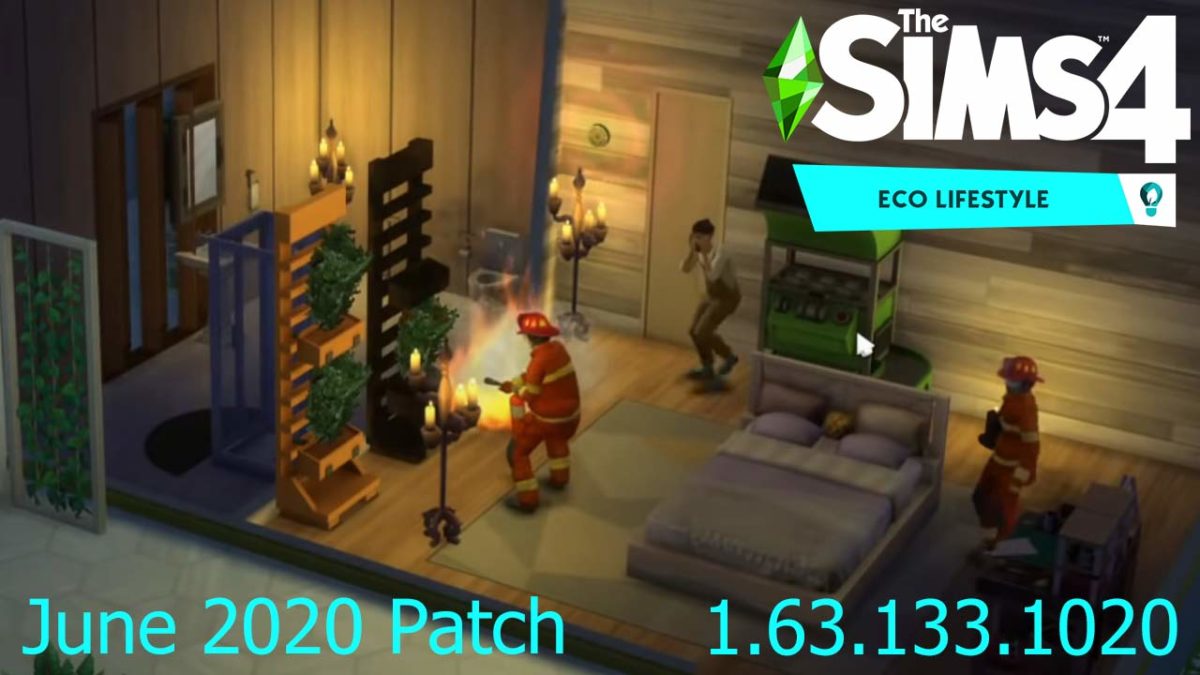 The Sims 4 Eco Lifestyle Expansion Pack drops in just a mere few days, and since we know that living your best Eco Lifestyle can take a little extra elbow grease, we’ve added some exciting quality-of-life improvements to help pave the way.

Between Inventory updates, new CAS assets from a surprise partnership with M·A·C the return of two beloved NPCs, as well as some really cool new Build features, we hope you enjoy the update.

Fellow hoarders, this one’s for you: We have updated the Sim Inventory with the ability to Filter, Sort, Favorite, Multi-Select, and Multi-Sell in one easy flick of the wrist. Managing that cumbersome pile of collectables you’ve been racking up for the past five years has never been so easy!

Free Placement of Doors and Windows

Following in true Eco Lifestyle fashion, Door and Window placement is now also Off-the-Grid. But not that kind of grid. The limiting kind of tile grid that used to keep you from placing your windows and doors precisely where you wanted them. By holding down the Alt key while dragging, you can enjoy the smooth sensations of free Door and Window placement.

Ladders have been added as part of the Build System. Find your free Classic Wooden Ladder in the Build catalog in the Stairs (& Ladders) category. Unlike Island Living’s Dock and Ladder objects for use on water lots, these Ladders can be placed anywhere on your lot and like stairs, they can be used as a means for Sims to traverse from one floor to another.

Did you say you needed some fresh looks for your Sims? We’ve collaborated with none other than M·A·C Cosmetics to bring you 12 fashion-forward makeup assets suited for everything from everyday to night out glam. If you’re not already using it, on PC and Mac we recommend trying out the “Uncompressed Sim Textures” setting in the Options Menu, which is now enabled by default on the High and Ultra graphics settings profiles in order to see these looks really shine. While console versions of The Sims 4 do not have the setting in the Options Menu, each console spec is automatically using the optimal graphical settings based on system resources.

The Repo Person NPC has graduated with honors from Discover University’s University of Britechester with a Degree in Villainy and has comfortably taken up residence in Base Game. Now everyone can taste their wrath if Bill payments fall behind.

Speaking of Bills, we’ve added a cohesive breakdown of Sim’s Bills information that can be accessed via an interaction on the Mailbox or Phone. Now instead of lumping everything together, you can see what percentage of your Bills go to Water, what percentage go to Power, insight into any Fees, Reductions, or Penalties. All this and more, calculated and cleanly presented for your finer understanding.

We have gone back and added Map Tags with Neighborhood Descriptions to existing neighborhoods that didn’t yet have them. We now have delightful icons, names, and descriptions for the no-longer-forgotten Willow Creek, Oasis Springs, Newcrest, and Windenburg. Ok, feel free to freak out now.

This one is tricky to list out in a single paragraph with attempted wit, so I’ll just drop this bullet list off right here:

Some people who have the Vampires Game Pack appreciate Vlad’s antics more than others. I personally love receiving a charming visit from Vlad, and sometimes I could really use a kind compliment about my neck. But we’ve heard there are a select few that don’t quite like having their Sim’s necks bitten and motives tanked by an invasive nighttime visitor with no respect for boundaries. Keep Vampires and other unwanted visitors at bay with a new No Trespassing interaction we’ve added to the Door.

Speaking of unwelcome visitors, we’ve also added a new Send Home interaction that’s available on visiting NPCs or as a self-interaction in the case of multiple visitors. How is this interaction any different from Ask To Leave or Go Away, you might ask? Convenience. Unlike its less efficient predecessors, this interaction is nearly instantaneous and leaves your visitors with no hurt feelings or Relationship impact. We added it as a useful tool for players, not necessarily as a story-telling mechanism.

How you build your lot can now affect your gameplay. Certain objects such as wall patterns, floor patterns, fences, and columns bring different gameplay modifiers. Some of these modifiers affect how your Bills and utilities are calculated by decreasing or increasing your Power or Water utility production or usage, as well increasing or decreasing the price of bills. Environment Score can now be impacted by certain objects and materials. Drywall walls without wall patterns applied now decrease environment score like they did in The Sims 3! The choice of floor and wall materials used can also affect the ability to spread fire or puddles at an increased or lessened rate. And if you’d rather build your lot without having to think about these things, don’t worry. There’s an Option in the Gameplay menu to turn all of this off.

Oh hey, and speaking of Fire, that reminds me. Did you hear that we’ve added Firefighter NPCs to the game? We took nods from classic Firefighter NPC behavior from The Sims, The Sims 2, and The Sims 3 and added a few small twists for The Sims 4. When a fire breaks out, Firefighters will come automatically to your lot if you already have a Fire Alarm installed. That way, if you still like to let things burn baby burn, you can just “accidentally” forget to place a Fire Alarm. It’s okay. We won’t tell anybody. If you honestly did forget to place a Fire Alarm, you can call the Fire Department from the Phone or by clicking on the fire itself. If the Fire Department is called, but there is not an active fire, they will call you on your lapse in judgement and charge you a fine. You won’t be punished if there was legitimately a fire that was extinguished before they arrive though. The Firefighter Uniform can be accessed in CAS and gives any Sim wearing it the Fireproof Buff, which gives them some extra protection against fires as well as make them more efficient at putting out fires themselves. It’s worth noting that Firefighter NPC’s do not show up in Island Living’s Sulani. Sulani already has their local Fire Brigade to handle these kinds of emergencies and besides, who wants to wear all that heavy Firefighter gear in the tropics?

Styled Looks for Tots and Kids

More than 20 New Styled Looks have been added for Children and Toddlers, using existing Base Game CAS assets to better flesh out some outfit categories that previously felt sparse.

After five years of Expansion Packs, Game Packs, and Stuff Packs our phone call invites were admittedly starting to get a little spammy. Moments after moving in, you’ve got Lucas Munch hitting you up, asking you to go to the Bluffs with him. Then not long after, you might have had Vivian Lewis asking you to join her at The Spice Festival. Jeez, let me get settled in first, why don’t ya? We’ve done a tuning pass to rebalance all of these previously competing Phone invites to give you a more meaningful and holistic experience.

In the same vein as the above balancing pass, we wanted to smooth out one of our more pressing notifications. The free earbuds pop-up that comes with Fitness Stuff has been changed to a more passive TNS and gifts your Sim the earbuds automatically when it triggers. The days of telling the game over and over that you don’t want free earbuds, or worse - hitting OK by accident - is a thing of the past.

Eco Lifestyle releasing on the same day across all platforms marks an important milestone for The Sims 4 as Simmers get to play the same content and share new creations on The Gallery together. In this update Console Simmers have a few additional features to improve their quality of life:

We have added a new Controls Overlay Reminder that shows up throughout CAS, Gallery, Live Mode and Build Mode which should make it easier for new Simmers to jump in and not need to remember all the controls.